World Tuna Day – what can we do for tuna from space?

What is the contribution of space technologies in the management of tuna species?

CLS, a subsidiary of CNES1, ARDIAN2 and IFREMER3, has been working to ensure the survival of this species for nearly 20 years. The French company calculates the positions of the tunas tracked by the ARGOS satellite system. CLS delivers this valuable information to scientists, biologists, conservationists from around the world who have set ARGOS tags (pop up) on the specimens they have previously fished and wish to study. Thus, about 2,500 tunas were located. Their migrations and distribution areas have been studied. These informations are crucial for the implementation of measures to conserve the species, to define protected marine areas or to establish periods of catch.

But the work of CLS does not stop there! Since 2010, the company and one of its teams of researchers led by Patrick Lehodey, in charge of Marine Ecosystems, are working on a forecasting model dedicated to this species.

Tell me what you fish, I will tell you how to fish sustainably! 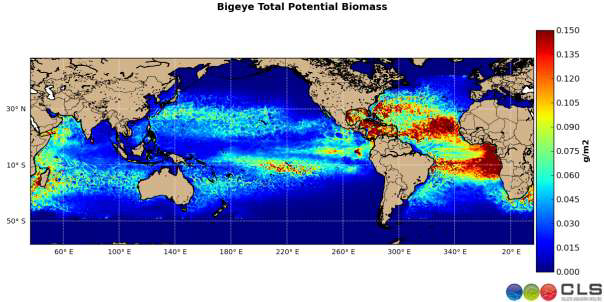 SEAPODYM (Spatial Ecosystem and Population Dynamics Model) simulates the change in abundance in time and space of several species of tuna according to their age, stage of maturity (larval, adult and older). The SEAPODYM Model can simulate the impact of fishing, environmental and climate changes on tuna populations.

Within the framework of a European H2020 project, CLS researchers worked on adapting this forecast model to Atlantic bluefin tuna, fished in particular by our French armaments.

The result of this work will be to provide daily maps of the density of larvae, juveniles (juveniles), youngsters, adults with spatial resolution at quarter of a degree (a grid with square cells of Side of ~ 28 km).

The basin-wide biomass estimation is consistent with the latest assessment driven by ICCAT: stocks of albacore tuna were reduced by about 35% for the adult population in 2010 as a result of the fishery.

This proves that the model is right and will be a key tool for sustainable management of marine resources.

The Centre National D’Etudes Spatiales (CNES) is the government agency responsible for shaping and implementing France’s space policy in Europe. Its task is to invent the space systems of the future, bring space technologies to maturity and guarantee France’s independent access to space. CNES is a pivotal player in Europe’s space program and a major source of initiatives and proposals that aim to maintain France and Europe’s competitive edge.The participation of France in the European Space Agency (ESA) is also provided by CNES.It conceives and executes space programs with its partners in the scientific community and industry, and is closely involved in many international cooperation programs –the key to any far-reaching space policy. www.cnes.fr

Ifremer, through its research work and expert advice, contributes to knowledge of the oceans and their resources, to monitoring marine and coastal environments, and to sustainable development of marine activities. To these ends, Ifremer conceives and operates tools for observation, experimentation and monitoring, and manages oceanographic databases.It also operates a great portion of the ocean research fleet, including all underwater systems and largescale mobile facilities and equipment (seismic, penetrometer, etc.). Created in 1984, Ifremer is a public institute of an industrial and commercial nature (EPIC). It is supervised jointly by the Ministry of National Education, Higher Education and Research and the Ministry of the Environment, Energy and Marine Affairs. www.ifremer.fr