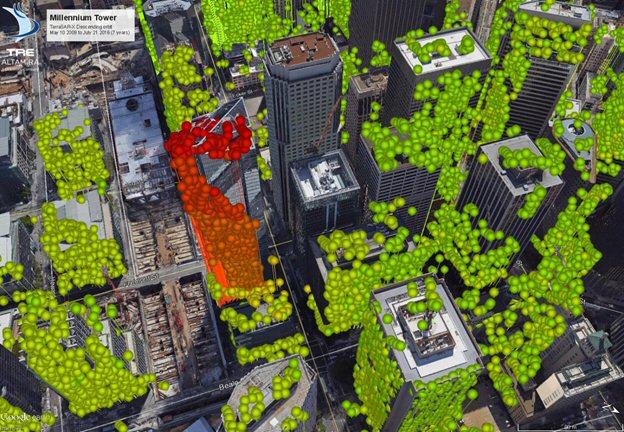 TRE ALTAMIRA, a CLS group company has processed 7 years of TerraSAR-X data to measure movement on and around the Millennium Tower.

The 179 scenes of TerraSAR-X provided a highly precise historical record of deformation where present. The high resolution of the TerraSAR-X data provided many measurement points over the entire face of the Millennium Tower facing the satellite, and the surrounding buildings. These 600 measurement points on the tower capture motion from the foot of the building to the top. Analysis shows that the tower is moving down and away from the satellite as measured along the line of sight from the satellite to the tower at an annualized rate of 26 millimetres per year.

In the figure projects the SqueeSAR™ derived measurement points onto the 3D Google Map optical image. The red points indicate movement away from the satellite which is down and to the west. Green points indicate neutral or no movement over the 7 years.

Read more about the SqueeSAR technology